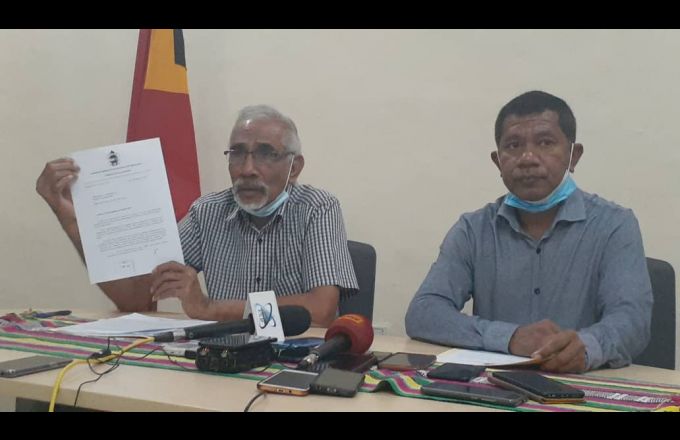 Oekusipost.com Dili – One of the largest political party in Timor-Leste, the CNRT party has decided to leave the actual government structure after the prime minister submitted a list of new government members from two political parties to support his administration until 2023.

In the 2017 elections, the FRETILIN party won the election by not having a majority in the national parliament, but the President of the Republic, Francisco Guterres Lú Olo dared to appoint the Secretary General of the FRETILIN party, Mari Bin Amude Alkatiri became prime minister for the seventh government even though his government did not get a majority seat in the parliament. With that, finally his government program was blocked by a majority vote in parliament, then the President of the Republic dissolved the national parliament and announced a new election in May 2018.

In the May 2018 election, three political parties formed a coalition and won the election at that time, and formed the eighth government called the Alliance for Change to Development (Aliansa Mudansa ba Progressu), but the President of the Republic as well as the President of the FRETILIN Party had refused to appoint 7 members the cabinet of the CNRT party and 2 people from the KHUNTO party to the day.

So this eighth government led by Prime Minister Taur Matan Ruak as well as the chairman of the National Liberation Party (PLP) runs his government without a complete cabinet member.

From June 2018 until the end of 2019, the CNRT party always asked the prime minister to try to complete his government structure by lobbying the president of the republic to appoint a cabinet member that was still pending, but the prime minister's efforts had been in vain because there had been no inauguration until now.

With this, then on January 17, 2020, the CNRT party began to change its political strategy by choosing Abstein against the 2020 state budget, the result of this state budget did not pass in parliament. From January to today the government in Timor-Leste has only been operating with duodecimal funds, without a state budget.

After 19 MPs filed a petition against the President of the Republic in a high court on 5 May, today the CNRT party has decided to leave the actual government structure.

CNRT Party Deputy Chairman Virgilio Smith explained the deed of meeting on April 20 that it was clear that the CNRT party would leave the actual government.

"CNRT has not taken part in this eighth government. Now only the PLP and KHUNTO parties are still in the government with a total of 13 votes in parliament that do not represent the majority in parliament," he explained.

He added the FRETILIN party would provide support because the prime minister had submitted a list of new cabinet members to the President of the Republic to provide inauguration, but to date there is no an inauguration.