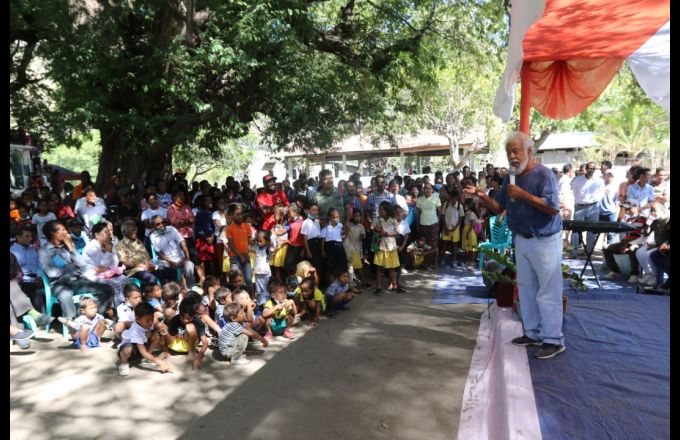 MAKILI (TOP) – Global cases have reached 19,734,428, according to Johns Hopkins University in Baltimore. The worldwide death toll has hit 728,612.

Since March until now Timor-Leste has not registered any deaths about Covid-19, but the threat of famine winds has plagued in several municipalities including the people of Atauro Island. Atauro is a small island situated 25 km north of Dili, East Timor, on the extinct Wetar segment of the volcanic Inner Banda Arc, between the Indonesian islands of Alor and Wetar.

The island is small, unstable island with a rugged landscape, plagued by frequent landslides, as well as a shortage of fresh water, especially during the drier months. Freshwater springs are present approximately 2 km north of Berau, with minor reservoirs around Makadade and the eastern slopes of Mount Manukoko. Wells along the coast provide poor quality water to most coastal townships. In 2004, Portugal funded a project to improve the availability of water and its distribution infrastructure, but a critical water shortage persists.

Some people in Atauro are now not only feared by the Covid-19 outbreak, but also feared by hunger, because almost all farmers in this small island have failed crops due to lack of rainfall in 2020.

The village chief of Makili Julio Asu Gomes stated that the entire community in his village had failed crops this year due to insufficient rainfall.

Gomes described that about 75% of the population is farming, and 25% are fishermen.

“Almost all of them don't harvest. Their house is empty, there is no corn,” Gomes conveyed this to former prime minister Kay Rala Xanana Gusmão during a solidarity action by sharing basic needs to several poor families in the Makili village, Atauro sub-district of Dili municipality.

He added that in the meantime the fishers also did not get good income because during the State of emergency they did not go out to fishing to support their daily lives.

“So the general situation is hunger and thirst have haunted my society. Even so, together with my people, I am very happy to welcome the charismatic leader Kay Rala Xanana Gusmão in this village”.

“The availability of clean water is also a big problem for us. We only have one spring, but it is very far from the houses of the residents and the volume of water has also decreased due to the long drought”.

He explained that in several years when the rainfall improved, the people collected rainwater to be used as drinking water in the dry season.

“But this year everything is missing because of insufficient rainfall”.

Responding to this, former prime minister Kay Rala Xanana Gusmão, who has been socializing Covid-19 in remote areas for nearly three months, stated that the problem of lack of clean water, bad road conditions and a long dry season not only happened in Atauro Island but also happened in many places around the country.

“I only hear about these difficulties, and I'm here not to seek data to pressure the government to resolve. I am not in the government; I am not carrying out a political mission. My mission is a humanitarian mission, the Covid-19 mission”.

“I will help what I can help according to my ability but what the government has to resolve must be submitted to the government”.

Even though the community has started to face the threat of starvation, but Xanana have asked young people not to carry out illegal activities with neighboring islands because Covid-19 in Indonesia has increased and has killed thousands of people.

"Better we survive a little than we die like ants".

Timor-Leste is a least developed country with a growing population that remains largely dependent upon subsistence agriculture; it has one of the lowest HDI scores/ratings among ASEAN countries. The main climate change related threats are the increasing incidence of dry periods, together with a higher variability with less frequent but more intense rainfall.