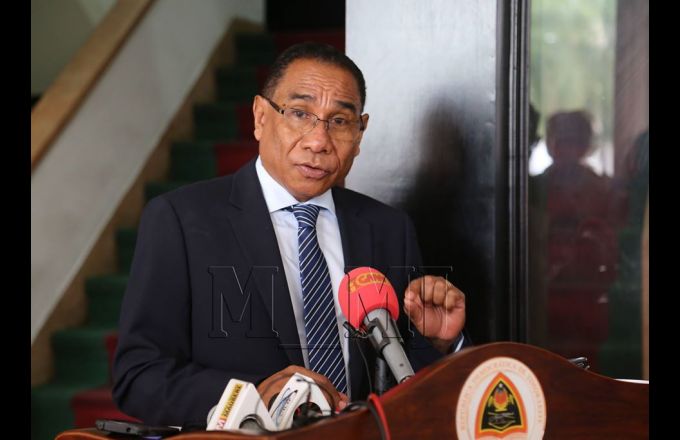 DILI (TOP) – Cambridge Advanced Learner's Dictionary define asshole as an unpleasant or stupid person but you should not say it to the politicians in Timor-Leste because the current government led by Prime Minister Taur Matan Ruak through the Ministry of Justice Manuel Carceres has shared this plan to criminalize defamation.

The proposal to introduce a law of criminal defamation to Timor-Leste’s penal code (Articles 187-A to 187-F) stipulates that any person who publicly states and publishes through social media ‘facts’ or ‘opinions’ that may offend the honour, good name and reputation of a current or previous member of government, church official or any public official can be prosecuted and punished with up to three years in prison.

"Freedom of expression and freedom of the press are guaranteed in the constitution. The principle of this defamation law came not to punish but to prevent us from making mistakes," Carceres explained.

Media rights groups say the new law will have far reaching consequences as it  criminalizes actual expressions of one’s opinion and even criminalizes a third person sharing this information. The IFJ has addressed their concerns in a letter to prime minister Taur Matan Ruak.

The proposed law inadequately defines ‘offences’ and places the legal burden of proving that a story is true upon the journalist and/or publisher. The offences would carry between one to three years’ imprisonment. A person who offends a deceased person can also be punished with a prison sentence.

TPLU says: “This bill contradicts the Timor-Leste constitution in articles 40-41 concerning freedom of expression and freedom of the press. We from TLPU condemned this law. The government is trying to use a national emergency opportunity to endorse this bill with the aim of punishing those who berate leaders and politicians, but in our opinion this is to criminalize journalists and all citizens not to criticize the government.”

The IFJ said: “We urge the government of Timor-Leste to take the necessary steps to ensure the proposal does not make it into the penal code. If laws to criminalise. defamation are adopted this will mark a retreat from a commitment to democracy and an open society which has been to the very great credit of Timor-Leste.”

The letter from IFJ to Prime-Minister of Timor-Leste:

Prime Minister of the Democratic Republic of Timor-Leste

I write on behalf of the International Federation of journalists (Asia Pacific) which, as you are aware, is active in protecting the rights of journalists in our region. It is the largest voice of journalists globally, representing more than 600,000 journalists.

In 2017, you provided invaluable assistance to the IFJ and to IFJ affiliate Timor-Leste Press Union (TLPU) in the case of its member Raimundos Oki. This was, as you will recall, following his outrageous prosecution under the criminal code. Your strong public statement in support of press freedom at that time and in opposition to Oki’s prosecution was noted. It was obvious back then that those charges were bound to fail, but of course the matter of principle was that the prosecution should never have been taken at all. Any prosecution against journalists will have a chilling effect upon journalists’ willingness to pursue matters of public interest without fear or favour.

Your support, and that of your wife who you will recall, attended the Oki trial in solidarity with him and his colleagues was deeply appreciated by the IFJ and its members in the region.

The support of many of those around you - not to mention the general support of journalists in Timor-Leste and numerous concerned citizens was keenly appreciated. I know that journalist organisations in the region were vitally interested in the Oki trial and heartened by the strong support that the cause of press freedom received.

Against this background it is most troubling now to learn of new ‘criminal defamation’ laws proposed for Timor-Leste. If adopted, these laws will mark a retreat from a commitment to democracy and an open society which has been to the very great credit of Timor-Leste.

There is no doubt it would be a grave enough threat to freedom if the law was a civil statute, but it would add insult to injury as the law proposes to create ‘offences’ which carry between one and three years’ imprisonment. These are some of the most egregious features of the current proposal.

The IFJ is currently preparing a detailed analysis of the proposed law and will provide this to you at the earliest opportunity.

Most critically, we hope and expect that no step will be taken to enact the proposed law in whole (or in part) until a significant opportunity has been provided for all interested parties to make representations about the law – particularly the journalists it will most certainly impact.

You may be certain that the IFJ will campaign against the law, as will Australia’s Media Entertainment and Arts Alliance (MEAA) and it is expected, the Alliance of Independent Journalists of Indonesia (AJI) and all the IFJ affiliates in SE Asia. I also note that the Press Council of Timor-Leste has expressed its opposition to the proposed law.

At this time, I respectfully ask you to take all necessary steps to ensure that the proposal does not make its way into the laws of Timor-Leste.